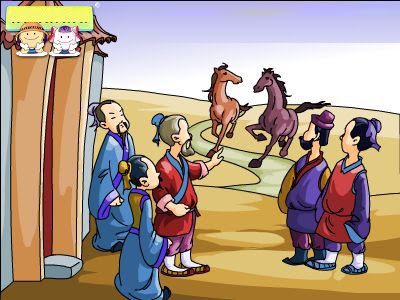 If you are feeling depressed or feel that your circumstances have got too much for you, take inspiration from this ancient Chinese story about an old farmer whose only horse ran away.

Knowing that the horse was the mainstay of his livelihood, his neighbors came to commiserate with him. “Who knows what’s bad or good?” said the old man, refusing their sympathy. And indeed a few days later his horse returned, bringing with it a wild horse. The old man’s friends came to congratulate him. Rejecting their congratulations, the old man said, “Who knows what’s bad or good?”

And, as it happened, a few days later when the old man’s son was attempting to ride the wild horse, he was thrown from it and his leg was broken. The friends came to express their sadness about about the son’s misfortune. “Who knows what’s bad or good?” said the old man. A few weeks passed, and the army came to the village to conscript all the able-bodies men to fight a war against the neighboring province, but the old man’s son was not fit to serve and was spared.

Can you relate this to your own life?

I know several people who were retrenched from their jobs. At the time it seemed like a total disaster. However life carries on and with hindsight they could look back and see that it was that disastrous experience that pushed them in another direction where they were much happier and more successful. I suppose the most important point is not to let yourself get stuck – you have to keep on moving forward, keeping your eyes and ears open to new possibilities to follow. For myself, I’m actually grateful for having had depression. It was terrible at the time, and I certainly wouldn’t want to go through that hell again or wish it upon anyone else. BUT… it grew me as a person, and pushed me into learning all the knowledge I needed for recovery and which I share with you here on my website.

I would love to hear some comments from you. Have you had an experience that, although seemed disastrous at the time, pushed you in a direction of greater satisfaction? Please share in the comments section. Go here to Start your journey of recovery.